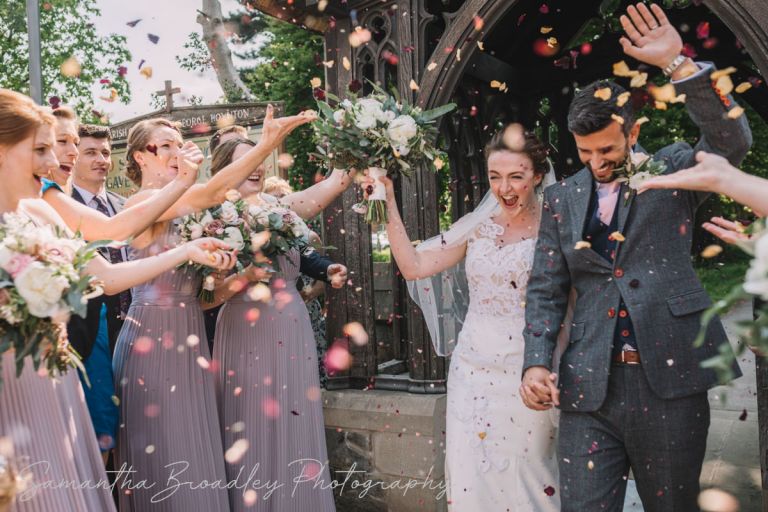 So if you follow my social media you will have no doubt seen that I mention how much I love a good Confetti Wedding Photograph, quite often. Ok maybe too often. But I really do, the happiness, the funny faces, the action in the finished photographs are awesome. So here’s a blog post dedicated to my love of Confetti at Weddings.

Confetti at Weddings, Why?

Let’s start with the tradition of confetti. I mean why do we even throw it. Whats it all about? Well throwing confetti actually started in Italy . The tradition has been pinched and is now used across the world. Traditionally confetti is thrown after the ceremony. Confetti is suppose to symbolise the gift of prosperity and fertility on the new marriage, demonstrating the well wishes from your guests. 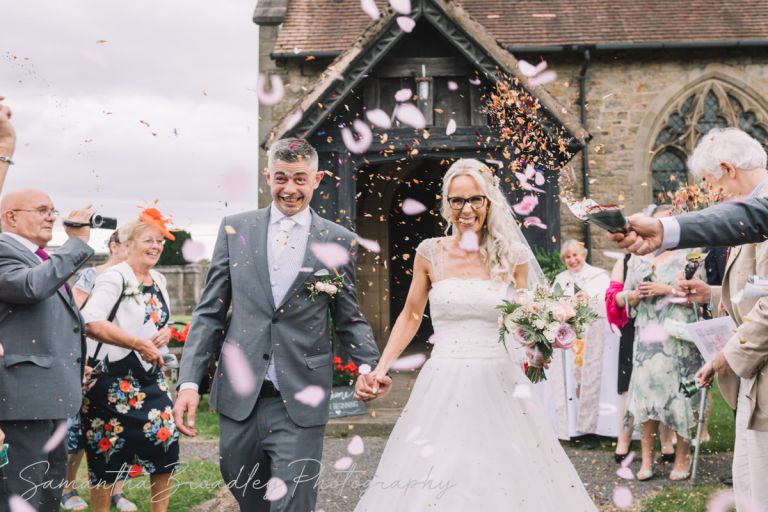 You love the idea of Confetti at weddings too. You want to experience the pure happiness this creates and the massive wave of congratulations it produces. Well don’t just expect your guests to turn up with loads of confetti. If your lucky one of your extra organised friends might bring one box. Or your Nan might bring some of that old foil confetti which you shouldn’t throw, because that’s just littering. So that one box your friend brought isn’t going to go very far with your 80 guests. So I always recommend to my couples, if they want that awesome fun filled wedding Confetti shot you need to supply it your self. 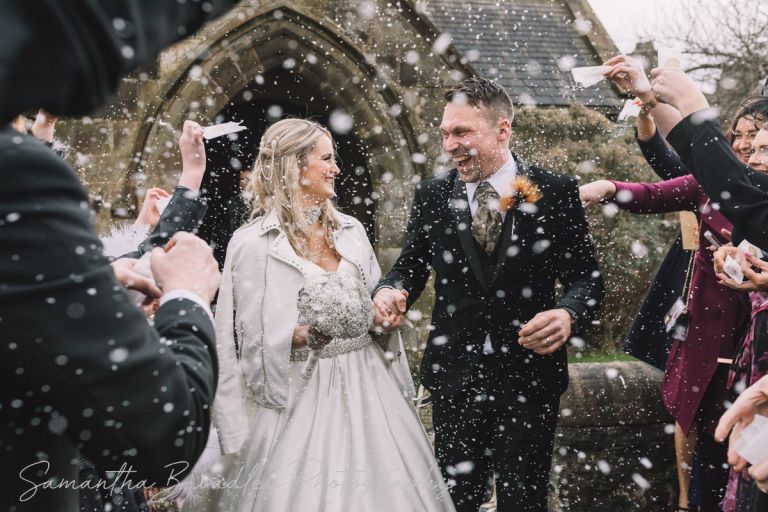 Now I know this might seem a silly thing to say but I always have a little chat with my couples before the confetti take off. I always say now try and smile look like your enjoying it. You are most of the time but sometimes you’re too scared about it hitting you in the face you keep your eyes shut or you spend the whole time trying to get it out of your mouth. I say embrace it the funnier happier faces the better. 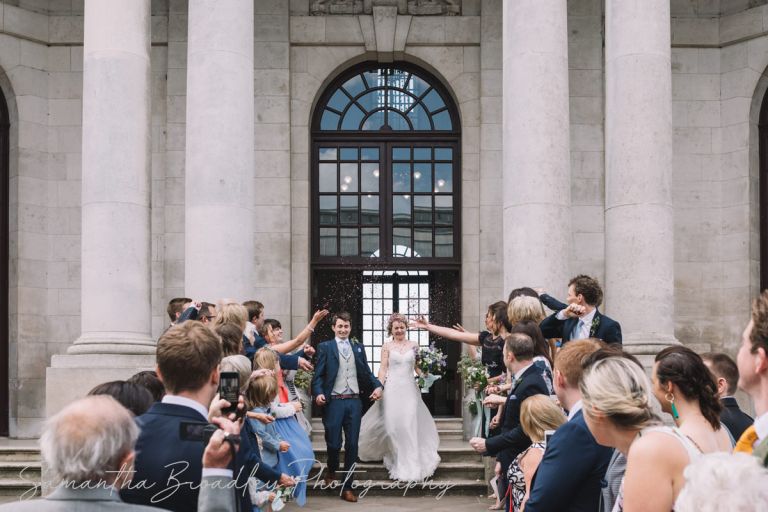 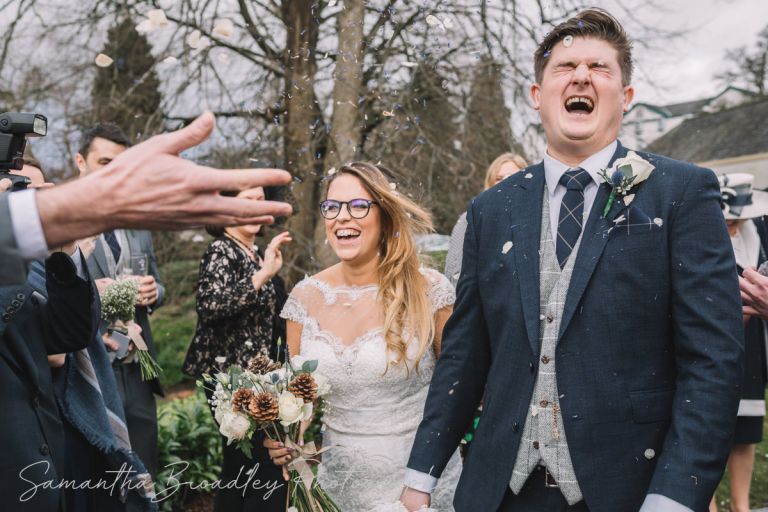 Which Confetti will you have

There’s so many options for confetti. The go too is the biodegradable confetti you get from most card shops. This Confetti is nice you get lovely heart shapes that flutter down throw the sky. The plain colour tones you get match most weddings. It’s also a great option if your not the organised bride you can just nip to the shop the day before. 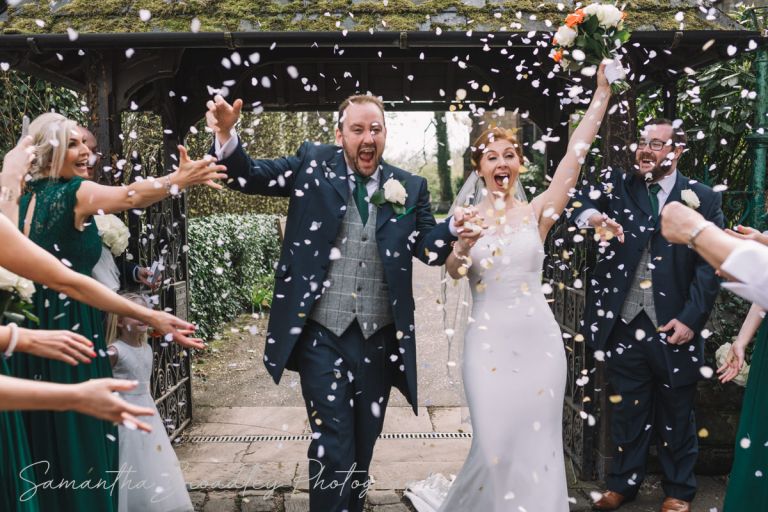 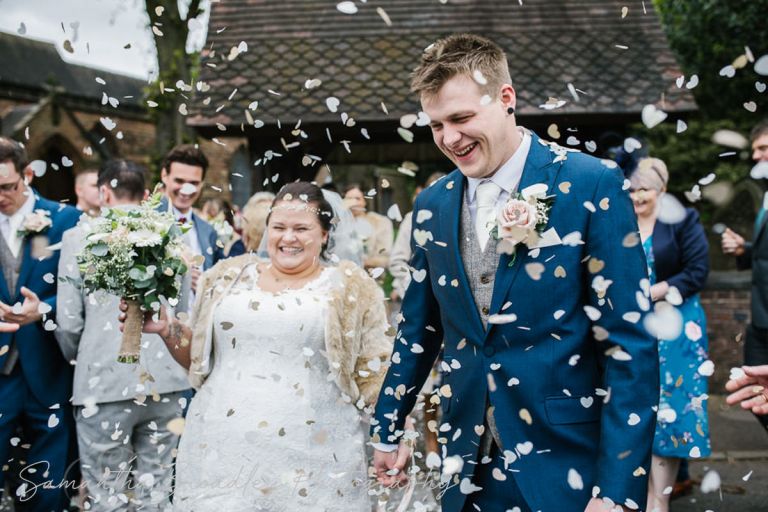 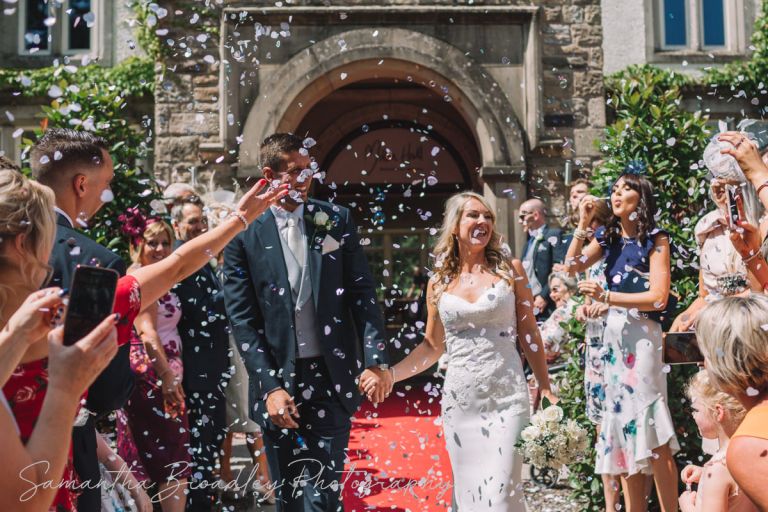 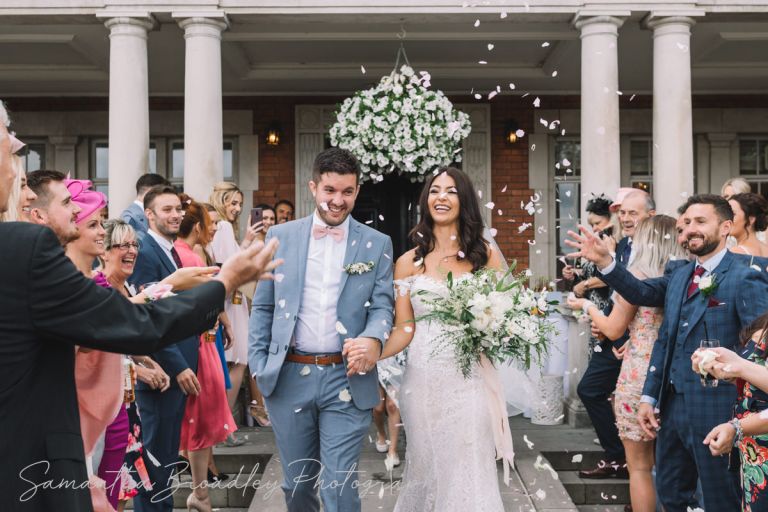 Another popular Confetti is dried petals. You can order petals to match your colour scheme, from companies like Dollz Confetti. The only think I say about these is to have larger petals if possible as sometimes they are that small and as they are quite spikey (if that makes sense) they get stuck in your hair. Some Brides love that others hate it, so something to think about. Bigger petals are easy to remove afterwards but obviously take up more room in the shot. 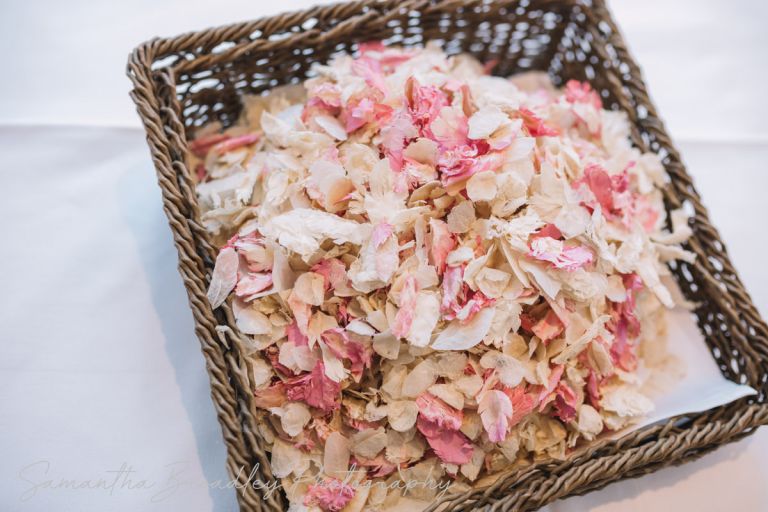 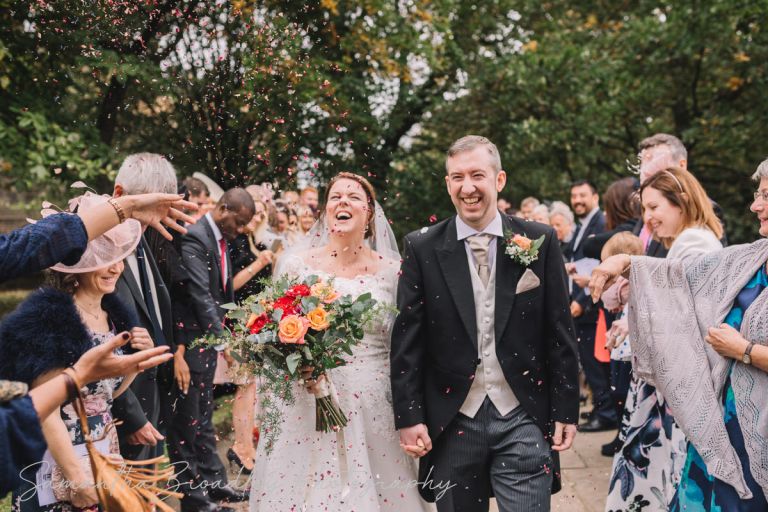 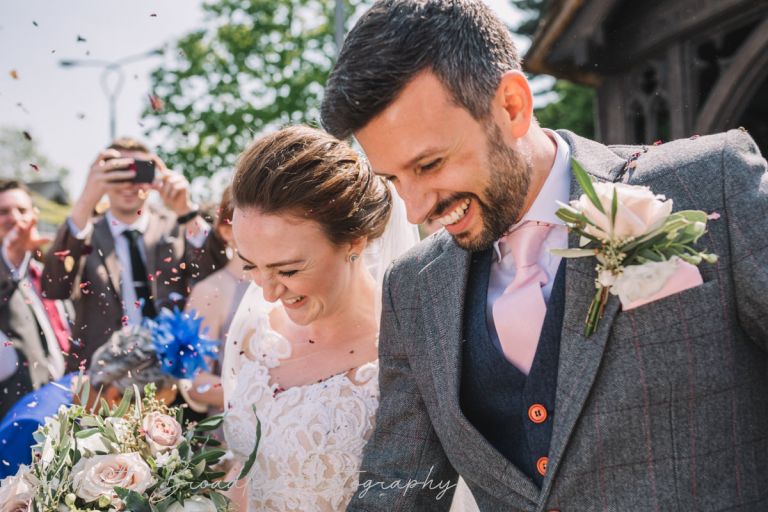 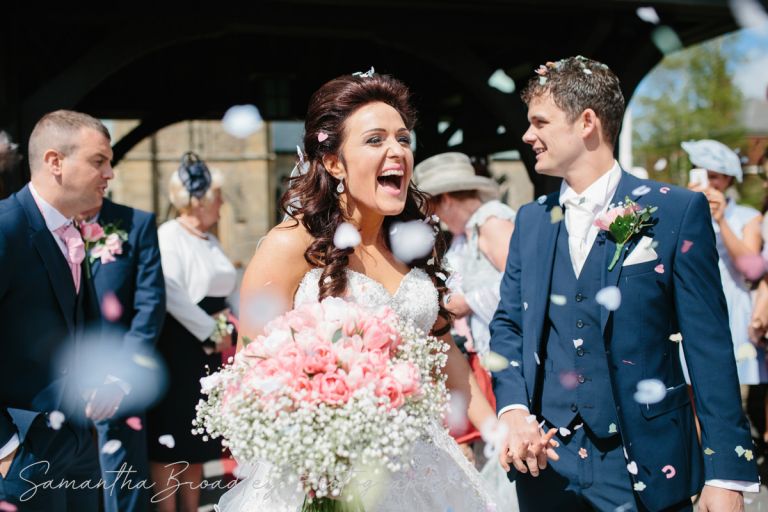 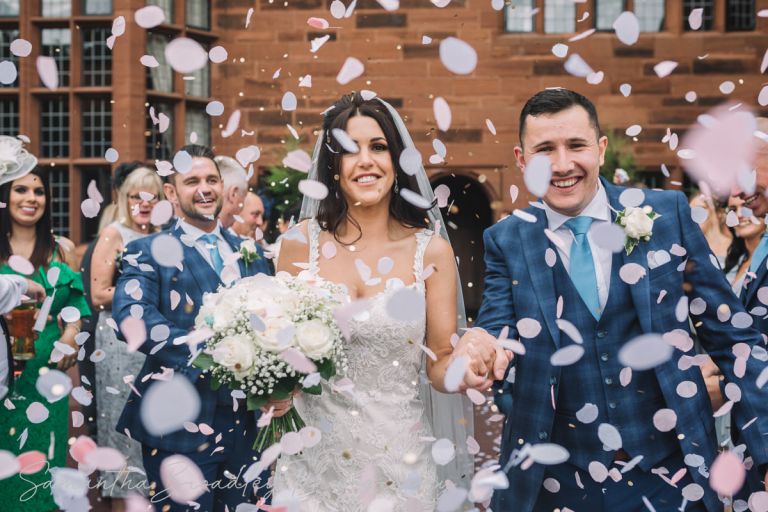 A lovely idea, well it seems like a lovely idea until it hits you direct in the face is Lavender/seeds. The smell is amazing but the impact not so much. Plus its so hard to get out of your hair, with out messing your hair up. 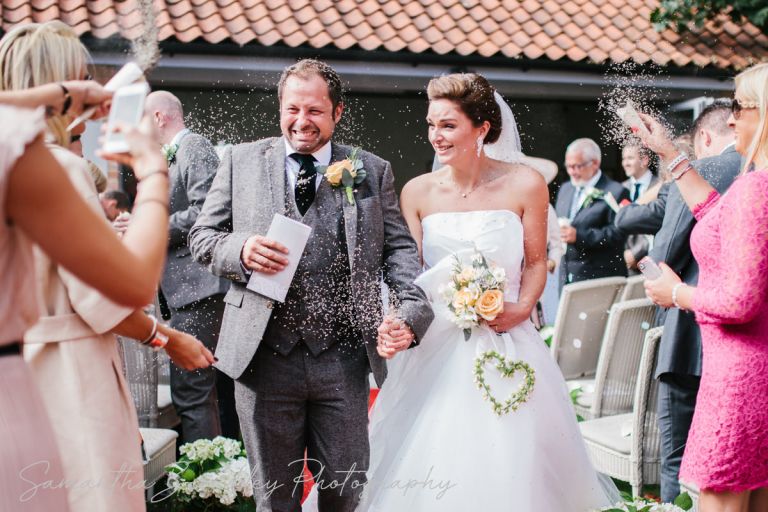 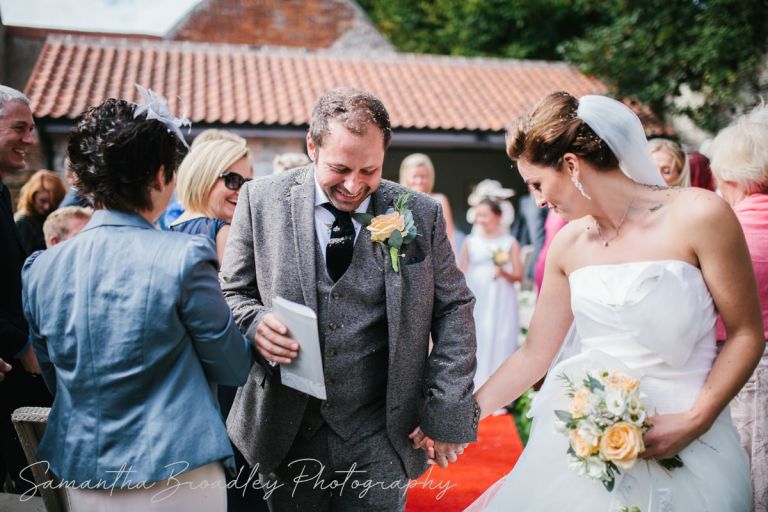 A good alternative to Lavender is Olive tree Leaves. This idea is simple but beautiful and as the leaves are bigger they are more visible. They also match eucalyptus bridal bouquets perfectly. they don’t stick in your hair or they are easy to remove if they do become tangled. 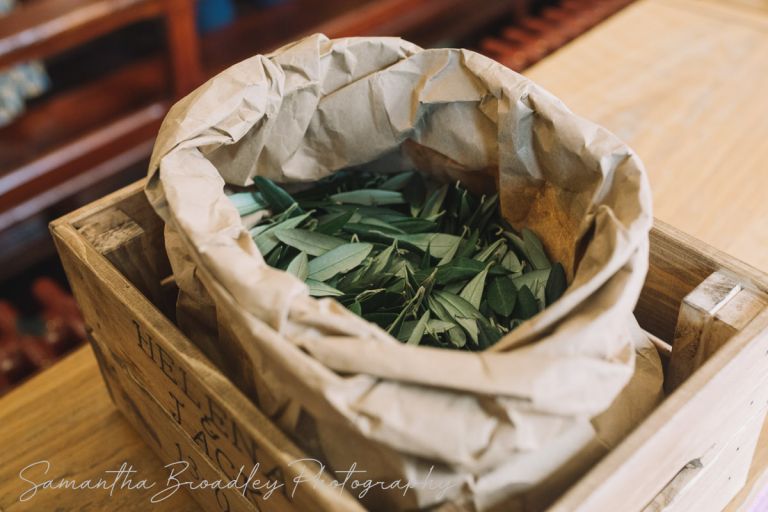 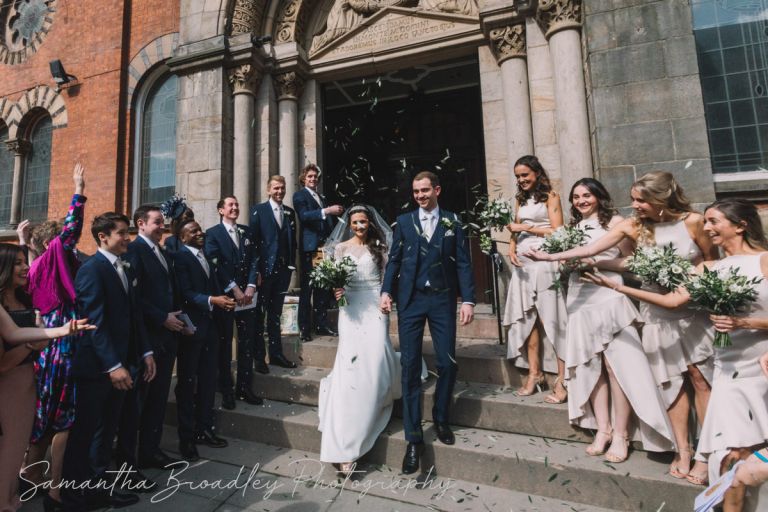 One I’m yet to photograph is Large biodegradable colourful circles. Like these, which can be purchased on Esty. The colour bomb that these will create will look awesome, if you like colour. 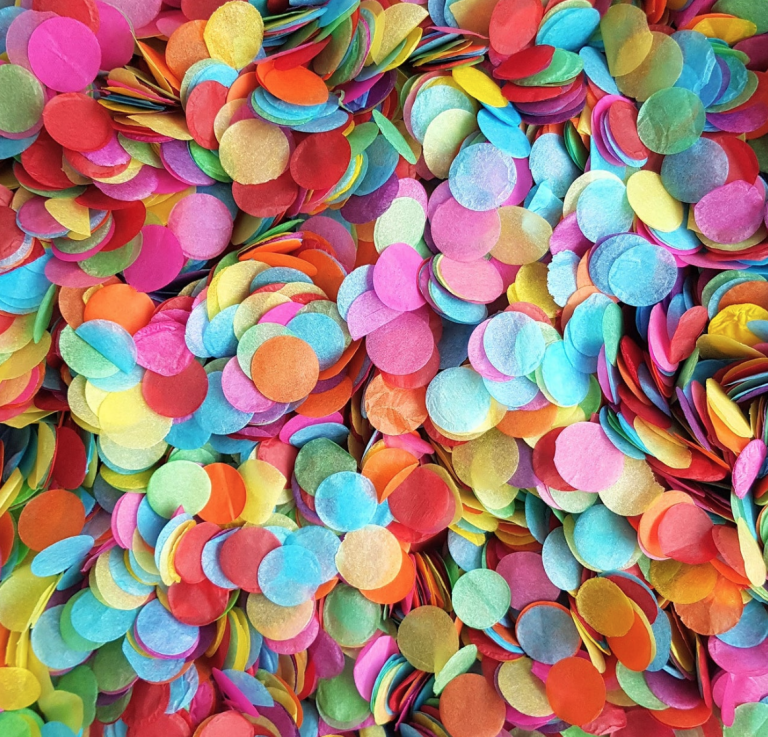 Another idea that I’m yet to witness and it’s one I absolutely love is making your own confetti with a hole puncher and leaves. You go out collect a load of leaves and spend a few evenings hole punching. This idea would suit a DIY Bride perfectly. No idea how long it would take but it would look awesome and it’s environmentally friendly. 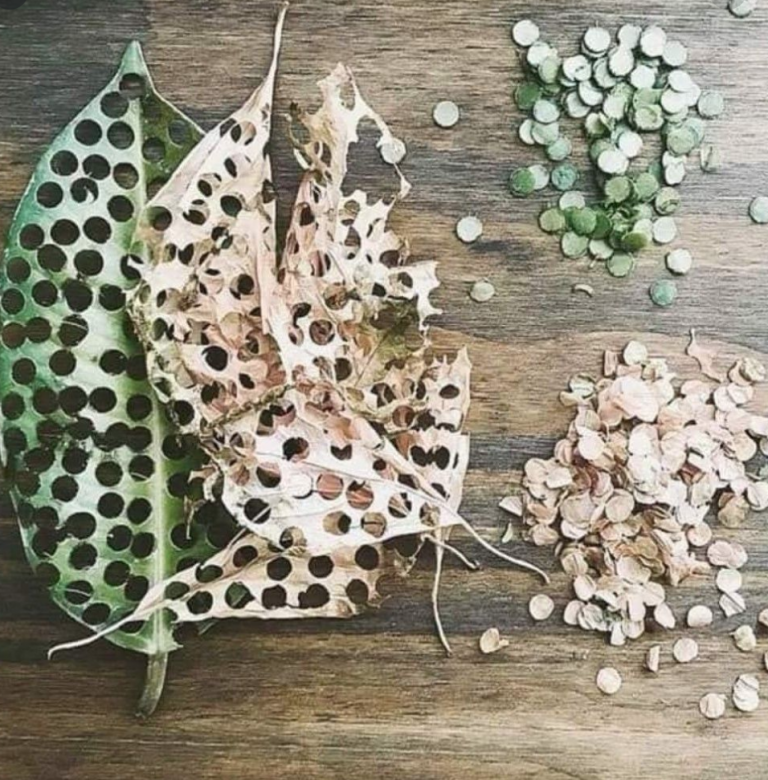 Now an old tradition is rice I wouldn’t recommend that one it’s not good for the wild life as it does get left behind and it hurts when it hits you in the face.

Last year I had quite a few couples that supplied their guests with Small bottles of bubbles. This is a great alternative,to confetti at weddings.  The kids and adults love blowing bubbles and nothing gets stuck in your hair, dress. The only thing I would say is you need every one to play a long as the bubbles take some blowing and they soon disappear so the more the better. Infact I even had a couple last year that bought some buble machines, just the cheaper ones that kids have. They just asked one of their groomsman to walk at the back of the ground with it. That worked a treat. 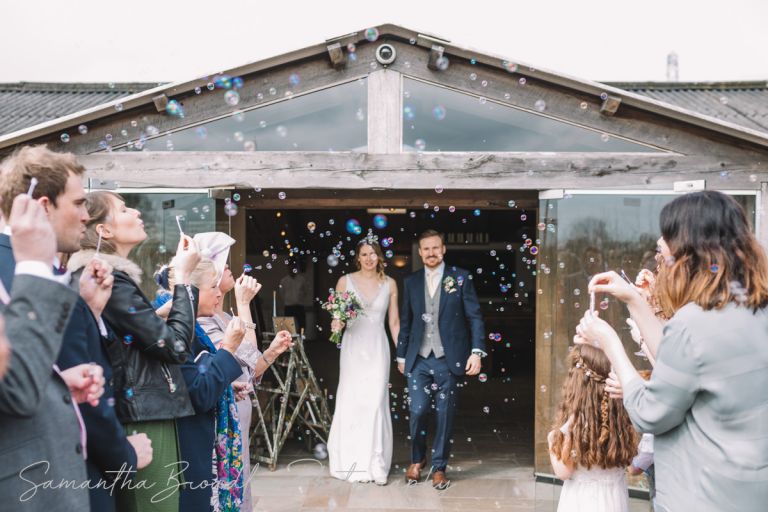 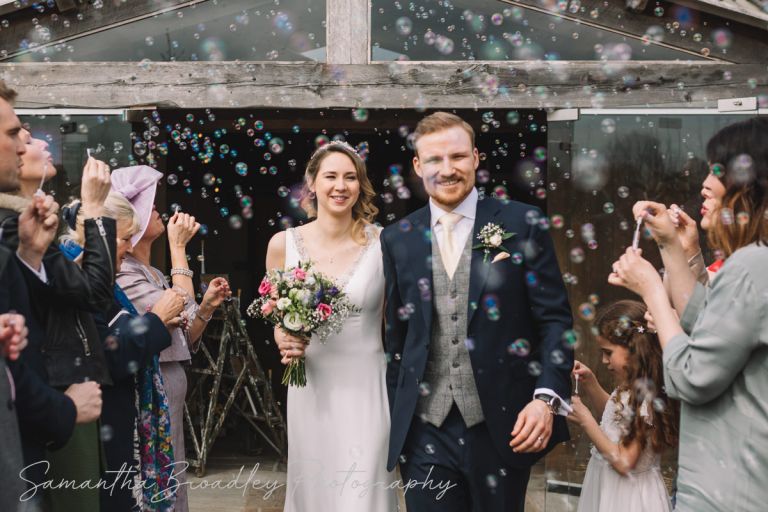 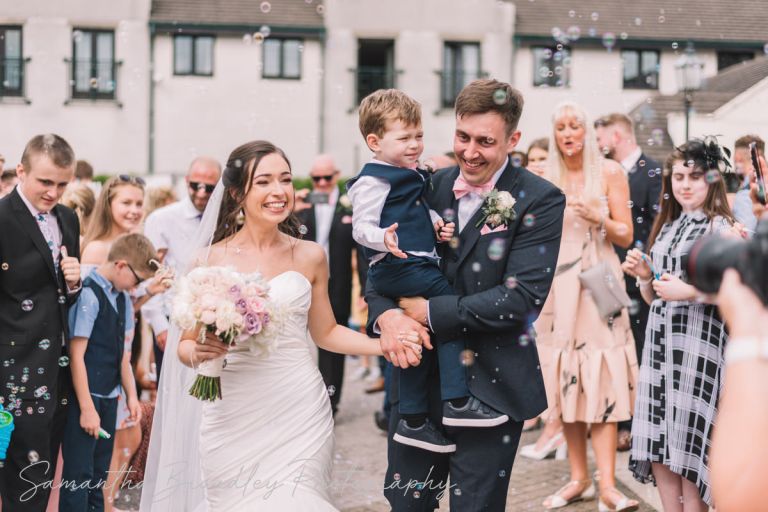 Now I always say to check with your venue whether they will allow you to throw confetti. They all have their own rules. Some are fine with it being thrown anywhere as long as it’s biodegradable which it always should be. Others just request you to only throw it in certain areas. Where as there is a handful that request you only throw it inside where it’s easier to clean up, so when this happens it’s a good idea to pop confetti on your guests seats with a little note saying “please throw when we walk down the aisle”.  Believe it or not their are some venues that don’t allow it at all, miserable if you ask me! 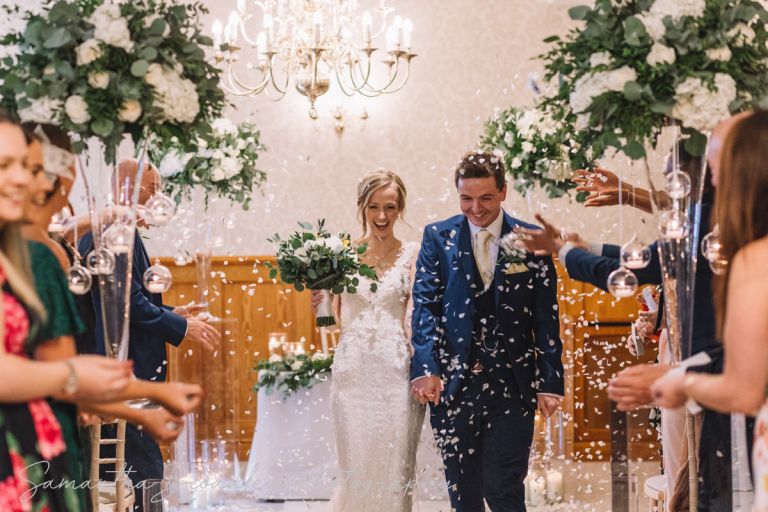 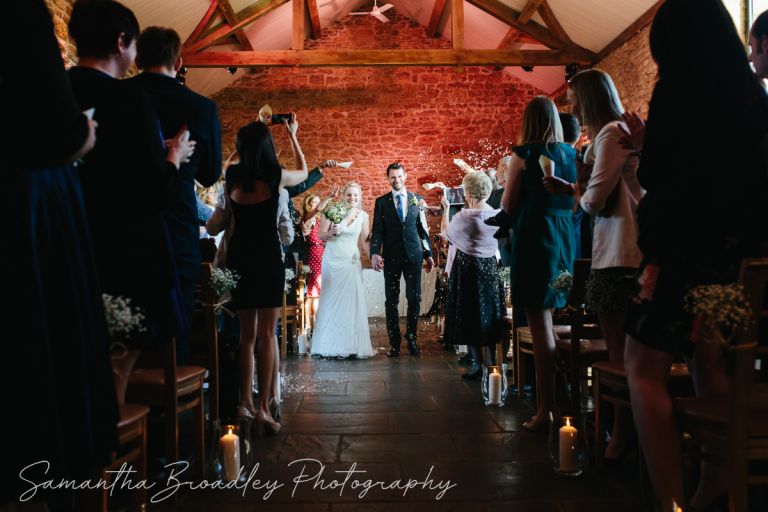 Another alternative or if you had to have more confetti is to have some during your first dance. Have a few friends stood on the corners of the dance floor ready to fire them up in the air at a certain point in the song. Your Guests won’t be expecting that one either, so it would be a great surprise and will definitely get the party started. Confetti Canons are awesome but should only be used inside as they aren’t usually biodegradable. 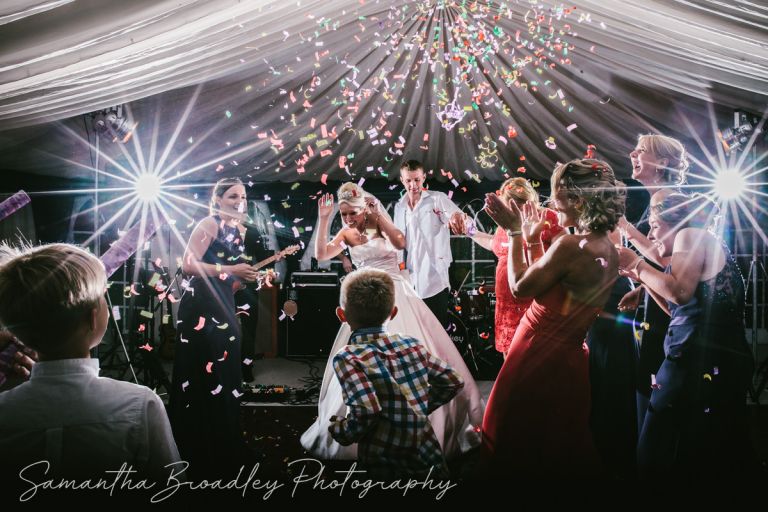 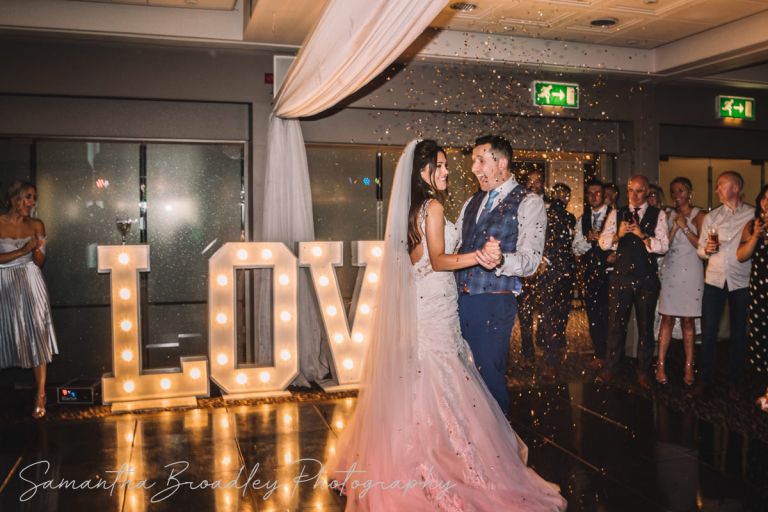 I hope you’ve enjoyed reading this post and if you love Confetti as much as me I’d love to photograph your Confetti at your Wedding. Contact me today